How we are ruining our fine old brick houses.

Chicago is, mainly, a brick city.  Oh, sure, there thousands of wood frame and brick veneer houses and balloon framing was, pretty much, invented in Chicago  But travel the neighborhoods (Chicago is also a city of neighborhoods, from Lincoln Park to Beverly and from Wicker Park to the South Shore) and you will see brick everywhere.  Most of this city was built with bricks and mortar.  Properly built masonry buildings need very little repair or maintenance but, as these houses age it is obvious there will be needed repairs.

And therein lies the problem.

Seems simple enough, doesn’t it?  Take out the old stuff and put in some new stuff, or smear some new stuff over the old stuff. The problems come from the “stuff”. Most folks don’t realize it, but the masonry materials we use in modern construction are completely different, (like, down to a molecular level different), than the materials our masonry homes were built with several decades ago.  And, many times, the new “stuff” is not nearly as good as the old stuff was. 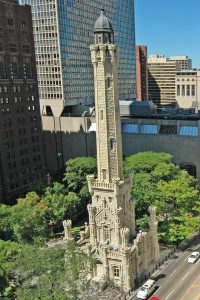 Chicago was built with brick.  This is, in large part, because of the Great Chicago Fire of 1871.  Hundreds were killed and over 4 square miles of the city were completely destroyed.  The fire’s northward expansion stopped at what has become a famous landmark, the Chicago Water Tower.  This is one reason for Chicago’s extensive fire safety building codes

And, please notice, the Water Tower (left) is built of masonry.

The building boom, following the fire, lead to the use of what has become known as Chicago Common Brick.  Made 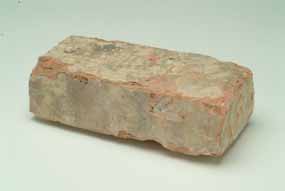 from very high organic clay (a waste by-product of the construction of the Illinois and Michigan Canal) and fired in old coal kilns.  This brick is very durable.  It is also softer and more absorbent than most modern brick.  This causes the brick to expand and contract with atmospheric and moisture changes.  It is also very “breathable” which allows it to dry, usually during the cold Chicago winters.

Because of these characteristics, it was necessary to use a softer mortar that had similar characteristics.  The mortar should expand and contract, along with the brick, and allow breathability.  The use and reason for mortar seems to have been mostly lost in the new generation of masons.  Mortar is NOT glue.  It does not hold the bricks together.  Mortar is a filler, it fills the voids between the various masonry units.  It is also sacrificial in that the mortar is supposed to crack, with the structure movement that is inevitable in any structure.  The mortar cracks so that the brick does not.  It is much easier to repair and replace mortar than it is to replace bricks.

The mortar that was used in this original construction was lime based, either lime mortar or a mixture called lime putty.  Lime mortars tend to cure (harden) slowly and, eventually, turn into limestone, which is very durable.  It was a perfect match.  Lime rich mortar has several characteristics that are completely different from modern Portland Cement based, additive laden mortars.  As water migrates through lime mortar, some of the lime is dissolved (right down to the molecular level) and will partially dissolve and travel with the water.  This allows the mortar to re-fill small cracks that occur due to normal settlement.  This is called autogenous healing and has been known about since the ancient Greeks.  Lime mortar will expand and contract to account for movement caused by atmospheric and moisture changes.  Lime mortars cure by carbonization, from contact with CO2 in the air, rather than by hydration, as modern Portland Cement mortars do.  It also was compatible with the moisture permeability of the bricks so water was absorbed and evaporated equally from both materials.  The older (solid stone) masonry would also absorb some amount of moisture, but the sheer mass of the wall would limit the amounts of moisture and the depth of penetration, and the moisture will evaporate back out of the wall with atmospheric changes. 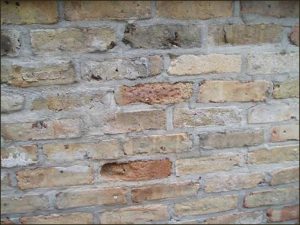 In the 1930s, Portland Cement mortars were introduced in America.  They are hard, brittle, and moisture resistant, but also much easier to use.  When new Portland Cement mortars are laid over the old original lime mortars, the water resistant mortars act to traps water in the wall.  When the walls freeze and thaw in winter, the retained water expands and the walls fracture and fall apart.  Building owners see the deterioration occurring, and mistakenly think they need to add more and more Portland cement to “keep the water out”.  What they are actually doing is sealing the water in!  Additional repairs with modern mortars accelerate the deterioration of the wall, as each new application seals the wall tighter and tighter. The end result is substantially damaged masonry.  I have, personally, seen 100 year old brick buildings, whose parapet walls were “rebuilt” using the standard (N type) Portland Cement mortars available today.  The rebuilt portion have literally disintegrated in 4 to 6 years!  Modern masonry techniques are, quite clearly, destroying these old buildings and houses.

Many restoration masons utilize modern Portland cement mortars because they are readily available at the big box stores, they are fast to mix and apply, and most significantly, the masons don’t have a clear understanding of what is necessary to perform a proper long lasting repair in the first place. In the end, the less savvy building owner thinks that since the entire wall is clean looking and appears to have been “tuck pointed” uniformly, he has received a good and very affordable repair. In fact, what they receive was a cosmetic overlay which, in most cases, accelerates the deterioration of the masonry.  With the recent influx of Eastern European masons into this area, their common practices are not proper for the Chicago style of building.  They, regularly, add additional sand to the mortar, hoping that this will add strength.  In fact, it makes the mortar mixture more water permeable.  This allows more water to be retained by the building’s brick. 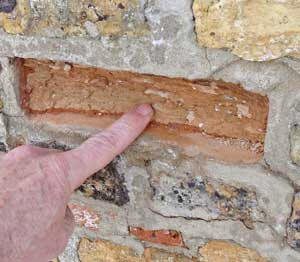 The most common result of improper mortar application is that the thin layer of parge mortar cracks falls off within a few years. In the areas where the new mortar extends deep enough to remain in place, moisture tends to be trapped in both the mortar bed joints and the edge surfaces of the brick.  In the picture (right) please note the different layers or mortar below the damaged area.  This condition causes the moisture laden brick to deteriorate through the expansion that occurs as it freezes. This is called spalling.  Entire faces of brick can literally begin to progressively flake off.  In many cases, the trapped moisture will cause entire sections of brick to bulge out away from the building due to freeze/thaw cycles. In both cases, the result is substantially damaged masonry and, sometimes, structural failure.

The previous 2 winters (2006-07 and 2007-08) were warmer and wetter than is normal which has not allowed the necessary winter drying of the brick.  And, as icing on the cake, the summer of 2008 had record rainfalls while the winter of 2008 – 2009 had a record number of freeze/thaw cycles.  Talk about a perfect storm! 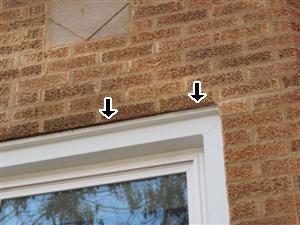 Another problem with old masonry buildings is the steel lintels over the windows and doors. Modern brick and masonry buildings have flashing installed over these lintels, but the older ones did not.  Over the years, moisture migrates into the wall, where it attacks the steel and causes it to rust and delaminate.  When the steel delaminates, it flakes and expands, very slowly, but with thousands of pounds of force. The expanding steel causes the brick around the windows to bulge, and causes decorative stonework to crack. The most common (and mistaken) repair is to caulk or grout the spaces between the lintels and the masonry and seal the lintels, which the inexperienced repairman thinks will keep water out of the wall.  What is actually happening is that the water is being retained in the wall, and the lintels deteriorate faster.

When new windows are installed it is common practice to wrap the window trim and steel lintels with aluminum cladding when windows are replaced.  The intent is to protect the window frame and the steel lintels, but the wrap cladding actually holds the water in the wall, which accelerates the deterioration of the lintel.

These misbegotten repair practices are so ingrained in Chicago construction trades that it has become standard practice to keep applying new mortars over the old mortars until there is a convex bulging mortar joint instead of a nicely struck concave joint. There are some new, inexperienced masons that have labeled this “European Tuck pointing”, as if the practice has some centuries old roots going back to the “olde” country.  While the new masons understanding of American marketing practices is admirable, this method is a disaster for older buildings because the bulging joint create thousands of little ledges and gaps that trap rain and actually funnel increased amounts of water into the wall.

There are a couple simple lessons in all of this.

We are blessed with a very unique architecture and building material in this City. If we want our masonry homes to continue on, we must educate ourselves, and then the tradesman that work on our properties. If we don’t do these things, we can expect that our homes will fall apart rapidly and have excessive repair costs. It’s always cheaper to do things right the first time.

And, a professional and knowledgeable home inspector can help in this regard.  Much of my work is consulting, both to home and building owners and to contractors.