NOTE:  We recently received a letter, from the North American Insulation Manufacturer’s Association, asking us to remove this article because they disagreed with it (actually, because it slams a product that this lobby represents).  I have edited it, accordingly.

We agree with this group that the there is research that says that fiberglass insulation does not cause cancer, there is also research that says it may.  The jury is still out.  See articles.mercola.com/sites/articles/archive/12/04/30/fiberglass-causes-cancer.aspx and http://www.lung.org/healthy-air/home/resources/fiberglass.html and http://www.idph.state.il.us/envhealth/factsheets/fiberglass.htm  and make your own decision.

But the most important factor, in my experience of inspecting thousands of houses and commercial buildings, is that almost no insulation contractor (at least in the Chicagoland area) installs fiberglass insulation properly.  It is cheap to purchase and installed by untrained, non-professional workman and does a poor job.  I will leave it to the reader to make their own decisions.

Fiberglass is a type of silicate fiber primarily composed of glass that is used in a wide variety of applications, and is predominantly employed as a residential and commercial thermal insulator. Fiberglass is also used to create products as varied as automobile bodies, boat hulls, arrows, roofing, shower curtains, and tent poles. As an insulator, it slows the spread of heat, cold and sound in structures, cars and aircraft.

By trapping pockets of air, it keeps rooms warm in the winter and cool in the summer and thereby serves as a convenient method to increase energy efficiency. Fiberglass is an attractive choice for home insulation because it poses no fire hazard. According to some estimates, thermal insulation (made from fiberglass and its alternatives) conserves 12 times as much energy as is lost in its production, and it may reduce residential energy costs by up to 40%.

In homes, fiberglass insulation can be installed in various parts of the building envelope. It can be pink, yellow, white or green, depending on its manufacturer, and has a spongy feel. Commonly found in blanket form, called batts, it is available in bags containing standard pre-cut lengths and widths. Batts are typically stapled into place. It also comes in bags as loose fill that can be blown into attic, wall and floor cavities. Most fiberglass batts are manufactured with a paper or foil backing, which serve as a vapor barrier, that faces the direction of warmth. When installed correctly, it creates a continuous membrane that retards the passage of moisture and reduces the likelihood that fibrous particles will enter the living space. It is important that the backing always faces the warm side of the structure in which the insulation is installed.

Batts are available in different thicknesses, with the thicker batts offering a higher resistance to heat flow. This resistance is known as R-value, with common R-values for walls being R11 to R19, and R30 to R38 for ceilings.

Fiberglass insulation is, usually, not installed properly.  The Kraft paper or foil vapor barrier should be installed over the wall stud faces and sealed.  This will ensure that there is no spaces between the drywall and the vapor barrier.  If the vapor barrier is not tight against the drywall, cold air and moisture can enter the interior of the building envelope space and greatly reduce the effective R value of the insulation. 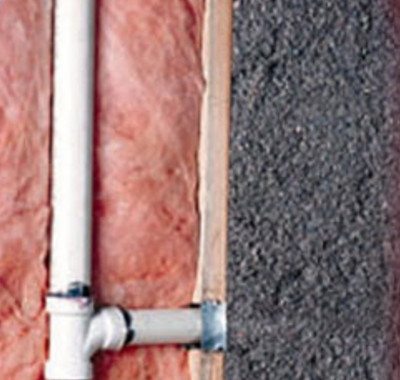 Cellulose, a plant-based insulator, is the oldest form of home insulation and, at times, has been produced from sawdust, cotton, straw, hemp, and other plant materials with low thermal-conductivity. Today, it is produced from recycled newspapers that are later treated with chemicals that reduce its flammability. It became popular in the 1970s due to the oil crisis, although it suffered from competition with fiberglass insulation as a result of fire-standards lobbying by the fiberglass and mineral companies. Cellulose must be chemically treated in order to reduce its flammable properties, although it always has the potential to burn. These chemicals, usually sodium borate, boric acid, or ammonium sulfate, are generally considered safe for human contact.

This material provides a number of advantages over fiberglass – it is inexpensive, significantly reduces airflow, and is not believed to pose any serious health risks. On the other hand, it is dustier, seriously weakened when damp, and generally offers less insulation per inch of thickness than fiberglass, although this last point is not always true. It is possible that the material can produce harmful off-gasses from the ink contained in the newspapers, but insulation is generally contained in sealed locations, so this is not likely to be a health concern. As is true with fiberglass, protect your lungs with a breathing mask when handling cellulose insulation.  The fire retardant uses, primarily boric acid, also can be a problem.

Although cellulose insulation is now considered to be a “green” alternative to other forms of insulation, it also has significant drawbacks:

Cellulose is a very good food source for mold.  If the exterior sheathing of the house has not been properly sealed or the drywall is not installed with a vapor barrier, moisture will be absorbed by cellulose insulation and mold will form.  Remember, wet insulation an be worse than no insulation, especially with regards to indoor air quality.

Cellulose insulation, over time, has a tendency to settle with age.  This produces an air space at the top of the wall, sometimes extending 2 – 3′ down from the ceiling.  This occurs if the insulation gets wet or just as a result of improper density during the installation.

Cellulose insulation is also dusty.  This can produce an air quality problem as the cellulose particulate floats through the air. 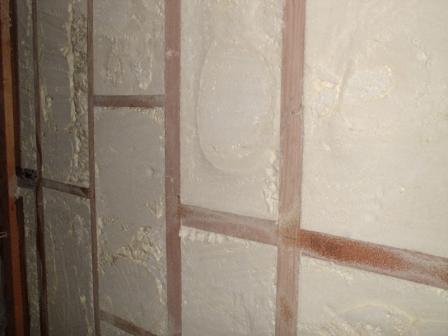 The problems of fiberglass and cellulose insulation, as well as their relatively low R value per inch, can be solved with a better alternative, in our opinion.  Spray foams have been around since the development of polyurethane insulation by DuPont in the 1960s.  The combining of two different chemicals at the spray head produces a chemical reaction that causes the product to produce bubbles of carbon dioxide and foam up.  The entrapped bubbles provide very good insulation characteristics.  Since it’s initial discovery, polyurethane foam has been joined to other foam products like polystyrene (Styrofoam) and Isocyanate.  Spray foam insulation not only provides better R value per inch, but also seals the walls against air leakage, the most common complaint in conventional insulation jobs.  Spray foam insulation also provides a vapor / moisture barrier and reduces water leakage.

There are two basic types of spray foam insulation:

Closed cell foam – The gas formation is less and the bubbles in the foam are smaller.  Closed cell foam has a slightly higher R value per inch (6 – 8), and does not allow water or water vapor to penetrate through the foam.  Also called 2 lb. foam, it is more rigid than open cell foam.  Closed cell spray foam is used in wall and roof areas where water and vapor barriers are needed.

Open cell foam – This type of spray foam, also called 1/2 lb. foam, has larger bubbles and allows for some air and water penetration through the foam.  It is also less rigid than closed cell foam and will move with the house as it settles.  Open cell foam is used on interior walls, for sound rather than thermal insulation, as well as for insulating wooden framed house walls.

The main advantage of spray foam insulation is its ability to close all the openings in the house’s exterior wall sheathing and where exterior wall penetrations (hose bibs, vents, gas pipes) exist.  The R value of an insulation product can be greatly decreased if there is cold air intrusion and spray foam insulation is a much better solution when a tighter building envelope is needed.  R value is a generally deceptive measurement that only refers to the resistance of heat conduction and does not take air and moisture intrusion into account.

Fiberglass and cellulose are both used as insulators, although they offer somewhat different advantages. Cellulose is cheap and safe, although it isn’t as flame- resistant and it should be avoided in humid climates. Fiberglass is fire-resistant, cheap and is not as affected by moisture, although it is probably more dangerous and does lose much of its insulation value if it gets wet.  With the new requirements for greater insulation and higher energy prices, spray foam insulation is becoming the best alternative available to solve these problems.