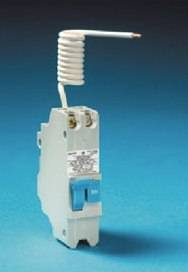 They are electrical receptacles (what a layman would call an outlet) and / or electrical panel circuit breakers that contain some extra specialized and micro-miniaturized electrical circuits that can detect the specific, characteristic signs of household electrical current problems that are present when certain dangerous situations occur.  When the detect such conditions, they automatically shut down the electricity, providing an extra layer of safety and, possibly saving a life in the process.  Regular circuit breakers are designed to protect the house’s electrical system from over heating and fire.  They protect the wires, NOT the people!  The amount of electricity that is needed to kill a human being is thousands of times less than the amount that will ‘trip’ a regular circuit breaker.  We have some explanations below.

Fuses and Circuit Breakers – Fuses and circuit breakers, also called “over current devices” are used in your house’s electrical system in order to guard against too much electrical current running through the house’s wiring.  As electrical current flows through the wires, it loses some of its power because the wires have an electrical resistance.  This is normal, but if too much current flows  (based upon the wire’s diameter and resistance rating) the wire may get really hot and can start a fire.  To prevent this, fuses or circuit breakers will detect when too much electricity is flowing and will blow (fuses) or trip (circuit breakers).  If this occurs it usually means that someone has tried to put too may electrical devices on one circuit.  Fuses an circuit breakers are designed to protect the house’s wiring from fire.  They are not designed to protect the people in the house from being electrocuted.  That is where GFCI and AFCI devices come into play.

GFCI Protection Devices – A GFCI receptacle (or special GFCI circuit breaker, GFCI stands for Ground Fault Circuit Interrupt) is a special electrical device that provides much greater protection from electrical shock than a standard electrical receptacle  does.  Think of a GFCI outlet as a small, ultra sensitive circuit breaker that is built right into the plug receptacle.  But it does not guard against fire like a normal circuit breaker would, but against human electrocution.  it should be called an ‘Anti-Electrocution Device’.  Here’s how it works.

GFCI outlets are now required to be used anyplace in your house where there is a close proximity to something that can electrically ground a human being.  Such places are; all kitchen counter tops and islands, within 6′ of other sinks or water sources, bathrooms, unfinished basements areas, garages and all outdoor outlets.  The requirement is NOT near water, but near an electrical ground.  They are required around sinks NOT because there is water but because sinks have plumbing fixtures that are connected to the house’s water pipes and these pipes are grounded.

Please Note:  If your house was built before GFCIs were required, local building codes do not necessarily require them, but proper home safety does!  Going beyond the minimum safety requirements of mere local building codes, to the higher standards of safety, is part of what a professional InterNACHI home inspector does.

Also, we hear the term “grandfathered” thrown around a great deal, but this term is not properly understood.  There is NEVER an item that is safety related that is grandfathered.  Safety is always the first concern.

AFCI Protection Devices – AFCI protection is much like a GFCI outlet, but it protects against an entirely different potential danger.  Sometimes, certain types of electrical appliances will be used to convert electricity into heat.  Sometimes, these devices will also cause heating where the device plugs into the wall.  This is called arcing.  You sometimes see it when you quickly unplug a heating appliance, like a clothing iron, from an outlet while it is switched on.  Electrical arcs can also be caused when someone drives a nail through a wire that is in a wall (like when hanging a picture) or by mice or squirrels who like to chew on electrical wiring.

An AFCI protection device will detect any ‘arcing’ (i.e. sparks, where electricity is being conducted through the air and converted to heat (can you day 5,000 degrees!) when you don’t want it to) and shut down the outlet before any damage can be done.

AFCI protection is now required, by the National Electrical Code, for electrical wiring that serve all sleeping areas, such as bedrooms or dens with fold out couches.  These are areas where fires could start and catch people who are sleeping or otherwise unable to get out quickly.  Newer standards, not yet fully adopted, will require the entire house to have AFCI protection, probably after 2008.

AFCI protection devices are not found in wall receptacles, but are incorporated into your house’s main electrical service equipment  panel in the form of special circuit breakers.  Your house can easily be AFCI protected.  Just have a licensed and insured electrician replace the circuit breakers for bedroom areas with AFCI circuit breakers.

Please Note:  Like GFCI outlets, older homes are not usually required by mere local building codes, but they are required by the much higher safety standards used by professional home inspectors.

You must ask yourself the question.  How safe do you want your home to be?  Are you willing to spend about $100.00 to add this protection?

The choice is yours.