An ice dam is a ridge of ice that forms at the edge of a roof and prevents melting snow from draining. As water backs up behind the dam, it can leak through the roof shingles (if you don’t have properly installed ice and water shield membrane) and cause damage to walls, ceilings, insulation and other areas.  Ice dams, in an of themselves, are not a real problem and usually cause no damage.  But if the roof was not properly installed and/or the attic area was not properly insulated, the backed up water will enter the house and cause significant damage. 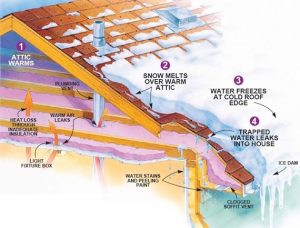 Ice dams are formed by an interaction between snow cover, outside temperatures, and heat lost through the roof – more specifically, from heat loss through the poorly insulated ceiling of the house into the attic area and under the roof.  The increased use of recessed lighting (also called “can lights”) and the resulting improper insulation in higher end houses has greatly contributing to this problems.  When there is snow on the roof, the warm portions of the upper roof (warmer than 32° F) melt the snow and allows water to drain down to the cold portions of the lower roof (at freezing or below).  These lower proof areas are usually at the roof edge, called the eave, and is colder because the over air, not a warm house leaking heat.  The melted snow re-freezes on the colder edges, forming an ice dam.  The result is an actual dam, keeping the liquid water from draining into the gutter backing it upwards where it flows between the shingles.  If the roof was properly installed (and they rarely are) the 3 feet of roof under the shingles and inside the house’s exterior wall will be covered with a rubber membrane (ice and water shield).  This membrane will not allow the water to enter the house.  But most roofers either do not install this membrane or they install it incorrectly.  The backed up water enters through the roof, causing water damage on the ceiling and walls.

Most ice dams form, mainly, because of improper insulationand air sealing of the house.  The old method of insulating the roof of a house called for insulation of the ceiling of the house and ventilation of the attic space, between the ceiling and the roof.  It was thought that by keeping outside air circulating in the attic space, that the air would cool the attic area in the summer (also keeping humidity down) and keep the roof cold and stop ice damming. 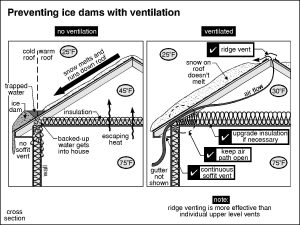 BUT… (isn’t there always a but?), new construction products have changed this.  The use of ridge vents (which I have never seen installed correctly, according to their manufacturer’s instructions) do not allow for proper ventilation.  The use of “blown in” attic insulation (many times without any vapor or air barrier) does not provide proper thermal insulation.  Sure, it may be “rated” with a high R value per inch, but R value has very little meaning in actual field use, as opposed to controlled laboratory conditions.  Even if the insulation is proper, and properly installed with a vapor and air barrier, along come the electricians, piercing through all that with recessed can lights.  These lights not only allow heat to leave the house and enter the attic, they also allow humidity from the house to flow into the attic, where it condenses and caused mold formation. 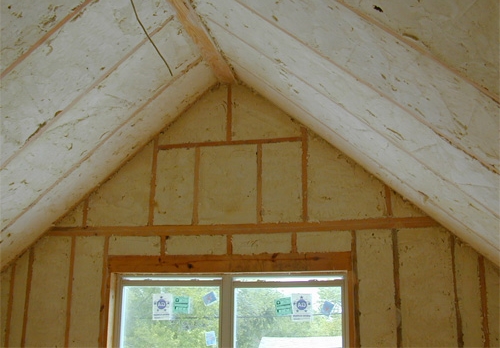 The solution is to insulate the underside of the roof structure with a closed cell spray foam product (right).  This not only provides a great deal of insulation to the house, but it will stop ice dams from forming.  I have seen this type of insulation save homeowners 30 – 40% on they heating bill and some 20 – 30 % on their air condition bill in the summer.

Gutters do not cause ice dams to form, contrary to popular belief, and heating wires in the gutter or at the edge of the roof do not help the condition, and can actually make it worse!  The heating wires are, at best, a band-aid approach and do not solve the problem.  Gutters do, however, help concentrate ice from the dam in a vulnerable area, where parts of the house can peel away under the weight of the ice and come crashing to the ground.   Hopefully, there will be nobody under the ice when this happens. 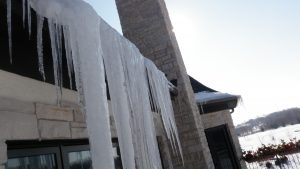 Ice dams are problematic because they force water to leak from the roof into the building envelope (ceiling and walls). This may lead to:

Keep the entire roof cold.  This can be accomplished by implementing the following measures:

Prevention and Removal Methods to Avoid.

In summary, ice dams are caused by inadequate attic insulation, but homeowners can take certain preventative measures to ensure that they are rare.