Possible new dangers in the future.

As an update to one of my previous articles, here, I have some alarming news.  Here’s the story:

A couple of days ago, I was asked by a contractor to meet with a single family home owner in Chicago.  The owner was having some problems with water intrusion and cracking of the crown molding in his master bedroom.  We met the home owner and an architect he had also invited.  Neither the contractor or architect were involved in the original design or construction.  The house is was a 3 story structure with a central penthouse on the flat roof and flat roof decks at the front and rear.  The sides of the building were split faced concrete block and the front and rear were covered with brick veneer.  The master bedroom was located at the rear of the building, under the rear roof deck.

We entered the master bedroom and I noticed that the crown molding joints were cracked and also seemed to be deformed, like something was pushing it down. There was some minor brown staining, commonly seen in water stain situations. 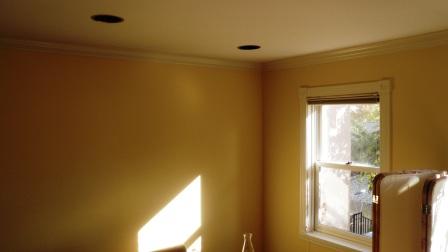 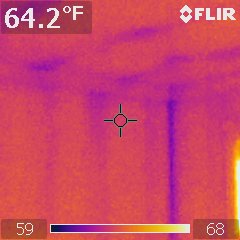 Thermal imaging of the exterior wall / ceiling area revealed that the furring strips in the wall were cooler than they would normally be.  They also had a diffuse pattern which could be a sign of increased moisture in the wall (wood furring strips tend to wick water when they are in direct contact with the masonry block).  The ceiling / roof wooden truss beams also looked cooler, especially the ends closest to the walls.

I checked these areas with a deep probing, non-invasive moisture meter which pegged (> 99% WE) at the truss end locations.

The trusses and the furring strips were wet, and much more so than I have ever seen before.  This is usually caused when there is excessive moisture migrating through the block.  Split faced block is very porous and must be properly flashed and even sealed or water will just travel right through it.  The high moisture content of the block allows water to enter the interior of the walls and wet the wall cavity behind the drywall.  This causes mold growth and wood rot.

The contractor removed a small portion of the ceiling drywall and look what was found! 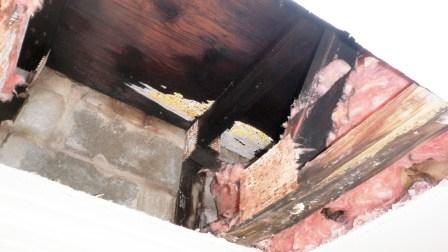 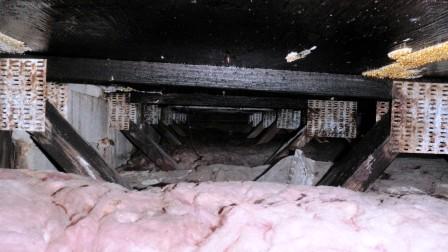 The truss ends were completely rotted.  You could poke your finger right through the wood.  The underside of the roof was also rotted and there were many exotic forms of mold growing.  Looking up in the space between the ceiling and the roof (right), I could see that all the trusses were in similar condition.  The inside of the block was wet as was the insulation.  All that black you see is water saturated wood.  When wood gets wet the mold spores that are lying dormant in the wood begin to grow and digest the cellulose in the wood.  This is simple wood rot.  The wood gets soft and, eventually, disintegrates.  And wooden trusses that are rotted and soft will no longer be able to hold up the ceiling and roof!  The result, if left un-repaired?  Structural collapse of the roof!

The only solution to this is to completely gut the entire top floor of the house, including the roof and the support trusses, and rebuild everything.  While this will cost the homeowner dearly, it is very fortunate that we found this problem when we did.  If this condition had not been found, it is likely that the entire ceiling could have collapsed.  Think of the weight of the winter snows (or just people walking on the roof deck) adding to the load and the rotted truss ends snapping.  This is called a pancake collapse and anyone in the room at the time of the collapse would have been crushed.

These type of buildings were, more often than not, built as condominiums, but some are single family homes like this one was.  Paradoxically, people usually buy condominiums because they don’t want to be bothered by the maintenance that a house requires.  Because of this, condominium owners tend to ignore the necessary maintenance that a large building requires, to their own determent.

We expect to see many more of these problems as these split faced concrete block buildings age and the owners put off the need for periodic inspection and maintenance.  But what we really fear is what the next few winters will bring!  Please, I am not trying to unduly alarm people, but the existence and prevalence of this problem is a real concern.  Remember, forewarned is forearmed!  These problems can be easily fixed BEFORE they get to this condition.

And given the history of the City of Chicago and its building department (which is greatly overworked and under funded) I also believe that this will become a political issue.  Who is to blame?  You just gotta blame someone, don’t you?  The real people to blame are the builders and the Architects.  A little known fact is that the Chicago Building Code states that the Architect or Engineer who designed the building must inspect the building, during and after construction, to ensure that it is built according the design.  In other words, if the building was constructed accordibng to the approved plans, the Architect is responsible.  If the builder “cut corners’, that the Architect should have caught these issues.

Many people will want to blame the city code inspectors.  They believe that if it was “code inspected” that a house or building should be perfect.  But the public has to remember that a building code inspection, during construction, is only a bare minimum standard and many buildings are  never inspected by the city.  With the municipal budget cut-backs of recent years, many city inspectors just rely on the contractor to make sure the work was done correctly.  You have to also remember that the city has NO liability, based upon the Illinois Appellate Court rulings as a result of the wooden back porch collapses of the past.  Mayor Daley has publicly stated that the key responsibility is on the builders.  Many of these buildings were constructed by inexperienced developers during the peak of the housing bubble.  Many of the workers were inexperienced or poorly trained, lowest quote workers.  On the other side of the equation, many of the standard design details that the architects specified were actually wrong.  A great deal of the problem was a lack of in-the-field history of this product.  Building a single wythe masonry wall in the Chicago area, with our climate and humidity conditions, is just a silly idea.  Other details, like the installation of a plastic “vapor barrier” behind the drywall, were commonly called for, but in retrospect are just plain wrong.  Oh well, live and learn.

Let us hope and pray that the irrational exuberance seen in the building boom of the 1990 – 2008 period will not have disastrous consequences.

Since the above, a lot of work has been done on this property. 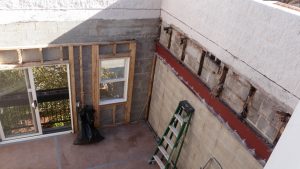 The roof joists had been removed and a steel C beam was bolted, through the masonry wall.  This C beam will serve as a ledger board, to support the new roof and ceiling trusses.  Note that the old trusses that were inserted into pockets in the masonry and grouted in.  They were totally rotted and came out easily.  It should be stressed that wood joists and trusses should NEVER be in direct contact with masonry.  There should, ideally, be an air space between these two structural members with shim spacers.  This produces an air pocket and water will not jump an air gap.  Typically, construction in this area also requires a flashing membrane to be installed above the trusses, but as always, the construction details that the Architect designs are, often, not followed through by the people who are actually building the building.  And, do not count on the General Contractor, or the Architect, to actually check on the quality of the details of the work. 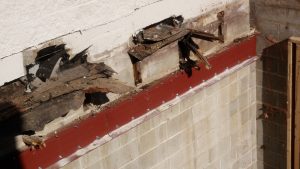 The City of Chicago Building Code, specifically states that masonry buildings MUST be inspected by the Architect or Engineer that designed them to ensure that the approved plans are being properly implemented.  This just plain doesn’t happen.  Usually, the developer of the client (if the house is being custom built) only pays the Architect to draw up “spec plans”, i.e. the basic, bare minimum plans that the City’s building department requires for the permits to be approved.  Paying an Architect or Engineer to supervise the construction costs too much and very few builders do it (and very few buyers want to pay for it).

A licensed and certified Home Inspector can supervise the work, at a fraction of the cost of an Architect, but very few people know this.

And, municipal code inspectors do not do this.  We pay taxes, but we do not pay enough to guarantee that the City will do it right.  And, at least in Illinois, municipal building code inspectors, by state court rulings, have NO liability. 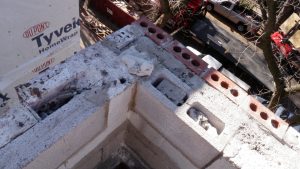 Let’s look at the front of the building.  This area  was structural CMU (concrete masonry unit) with a brick veneer.  The brick is fully sized, but does not serve to actually support the structure of the building, it is just there for appearance.  There is nothing wrong with this type of construction, except for one thing.  The brick veneer should be separate from the structural CMU by an air gap.  This air gap, usually about 1″ wide, keeps any water in the brick from penetrating into the house.  Water will not jump an air gap and will drain down to be wicked out through the weep wicks at the bottom of the wall.

As we can see from this picture, the masons “grouted” (i.e., filled with mortar) the air gap.  This provides a direct path for any rain or moisture in the brick to directly cross over into the structural CMU.

Also, in accordance with national “best practices”, the interior cavities of the CMU block should be filled with steel reinforcing bar (rebar) and grouted (filled with mortar).  In this case, the masons simply threw any masonry scraps they had into these cavities.

So, water has a direct path, through the grouted air gap and to accumulate in the CMU cavities.  There was also no flashing above this area, which allows water to leach through the coping stone and leak into the walls.

And they wonder why the walls are wet and the roof trusses are rotted.  Go figure! 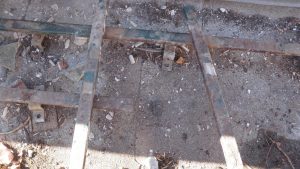 Oh, and one more thing.  Everyone who lives “in the city”, in a high density urban area, wants to have “outdoor space”.  Where do they find it?  The answer is roof decks.

But, how to you install a wooden deck on a flat roof?  In this case, very poorly!

But this contractor went out of his way to do it REALLY bad.  The roof deck supports were metal and rested directly on the room membrane material.  Hey, guy, at least the wood was soft!

A much better solution for a roof deck is sponge mats or plastic dimple tiles.  They will protect the roof membrane from deck furniture or shoes, bit will not rip up the membrane.

And, even with a wooden roof deck, when it becomes time to replace the roof (all roofs, eventually, fail) the owner has increased the cost of replacing the roof because of the extra labor required to remove the deck, then replace the roof membrane, then re-install the deck.

And it NEVER looks as good as it did, originally.  Take from me.  I have seen hundreds of these.