(The cheap guy is usually the wrong guy.  Why pay twice?)

Home inspectors, at least those who have been doing it for awhile, have a professional disability.  Don’t get me wrong, it’s a good thing.  Really, only our wives think it is a disability.  Many is the time I have 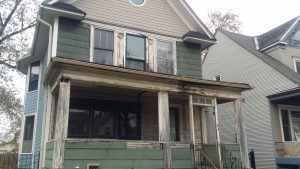 been driving with my wife, going to a movie or something, and we pass by a house.  But this house catches my eye.  I notice something.  It’s almost like the old “spidey sense” I read about in Spiderman comics books I read as a kid.

Either the chimney flashing is wrong or there is old cracked and peeling wooden siding or the grade around the house is too high or some other of the thousands of different defects that we run across in our profession.

I slow down the car.  Sometimes, I even get out and take a picture (I use them for the classes I teach).  And my wife always sighs in exasperation, saying “You are SUCH a home inspector!”

I guess that I am.

The three days ago, I was walking my two dogs, like I do every morning.  A couple of blocks over I noticed a small Ranch style house where wooden forms had been installed, evidently for the pouring of a new concrete driveway.  I was drawn to it and crossed over to that side of the street.  As I passed by the house, I noticed that the edges of the wooden forms, the sides that would determine the final level that the driveway surface would have, were too high.   The house was frame/brick (wooden frame structure with brick exterior).  This type of

house has weep holes where the brick exterior meets the concrete foundation wall (Left) to allow water to drain out. The forms were placed so that the final level of the concrete driveway would, at least partially, cover some of these weep holes.  This would also mean that, if it rained, water from the driveway would flow into these holes instead of allowing water to drain out from the wall cavity.

The house also had steel frames around the basement windows. Window wells.  If they poured the driveway with the forms as they were, the concrete would run down into these wells.  I shook my head in wonder and walked on.  “Gee, they hired some real brain surgeons for that!”  I though to myself.

The next day, I was again walking my dogs and came to the same house.  The concrete guys were there and getting ready to pour the concrete.  I walked over and saw one of the guys drinking coffee, waiting for the cement truck.  “Hey, I happened to notice that your forms are too high.” I said.  He looked at me and said, “No habla anglaise.”  He pointed me over to another guy.  I approached this guy and again told him of the problem.  He answered, “The village already signed off on it.  It’s code”  This is funny for two reasons:  1) Our village does not require a permit for new driveways and 2) if they did get a permit, it should have been posted, clearly.  So this guy was just blowing smoke.

I then pointed out that the window wells were too low, that his concrete would just run into them.  He said, “Good point, thanks!”  He walked over and started talking to his guys.  “OK, Will,” I said to myself, “You did good.”  I continued walking my dogs.

Today I also happened by this house (what can I say.  Dogs gotta go.).  What I saw made me sick.  As you can see from the picture, below, they didn’t adjust the forms.  They didn’t even address the window 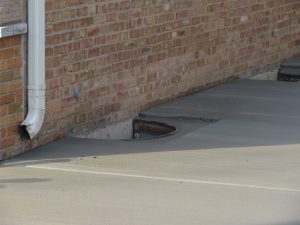 wells and probably.  They just made the whole situation worse.  Please note a few things.

All that water, right next to the exterior wall, will wick up the brick and destroy it.  That is, all except the water that will be entering the wall assembly through the weep holes.  That is except for those weep holes that the concrete guys decided should not be there and that they re-pointed closed.

Essentially, this contractor just destroyed this house.  Not today and probably not for a year or two, but it is destroyed.  The owner will not only have water flowing into her basement through the window wells and open weep holes, but also water wicking up the brick and spalling the wall.  All because the concrete guys didn’t know what they were doing.  They didn’t think.

Construction work is more than just “doing the job”.  FIne Homebuilding  Magazine recently reported that 81% of the people working in the residential home building field have NEVER had any formal training in their trade.  I run across people, every day, who “learned it from my dad” or “learned it on the job”.  And, quite frankly, the lack of quality I see every day shows it.

Professional contractors, regardless of the particular trade, have had both “book learning” and practical field experience.  Union training usually includes at least 4 years of actually doing the work as an apprentice under the direct supervision of a professional.  It also requires classroom training and testing for knowledge of the trade.  As such, a professional tradesman knows what they are doing, but also knows WHY they are doing it.  Just because someone is “licensed” does not mean that they have been properly trained.  In most trades, licensing is just obtaining a business license with not testing required.

Trained professionals actually think about the job.  They look at the current conditions and plan out how they will address the work, but more importantly, they will also look for special problems or specific conditions that may cause them to vary how the do the work.

They actually THINK about what they are doing.

Chimneys, where the meet the roof, should be equipped with step and 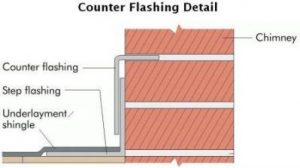 counter flashing.  This works to keep water from entering between the chimney and the roof decking.  Most chimney’s are brick and the counter flashing, on top of the step flashing, is best installed by sliding it into grooves cut into the mortar

between the bricks.  That way, there is a solid, physical connection to keep the water out.

In Illinois, roofers are a state licensed profession, with testing and continuing education requirements.  But… only one person in the roofing company has to have this license.  And it is almost always that the person holding the license is not the guy that is actually going to be doing the work.

Roofers, around here, hire crews to do the actual roofing work.  While these crews may have installed many roofs, that is no guarantee  that they installed them correctly.  I would bet that very few, 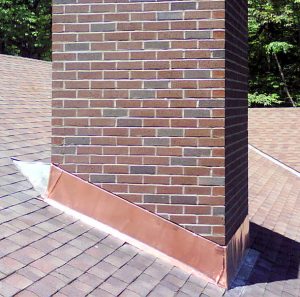 if any, have actually had ever had any formal training in roofing.  This is seen in their work, especially  with regards to the chimney flashing. Sometimes, they just put a piece of metal counter flashing up against the chimney and caulk the top (Left).  This means that the caulk is the deciding factor as to how long it will be before the chimney starts leaking.  Other times, the chimney is not constructed with brick, but with stone veneer.

Brick is smooth and even if it is just caulked, the flashing will last for awhile.  But stone is not smooth.  As seen here. The 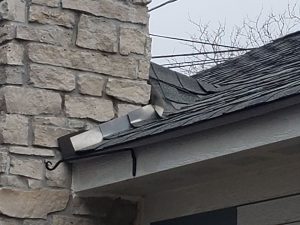 the result is usually not pretty.  This picture was of a newly constructed house that had just had its last municipal code inspection, which it “passed”.  What is your guess about how long it will take to have this chimney flashing start leaking into the house?

My suggestion to you is to only hire properly trained, professional workers when you are having your house built or repaired.  I know that people usually get a number of quotes and many times pick the cheapest guy.  But when three quotes come in as $10,000, $7,000 and $2,000, doesn’t that tell you something about the quality and thought that will go into the workmanship?  Is getting a “good deal” on a home repair worth having to re-do that repair in 2 to 3 years? Quality costs more because the workers have invested more in their training.

Remember, these sub-standard home repair guys can only stay in business if they are hired.  If every consumer smartened up and checked up on who was going to be doing the work, things would change.  The fly-by-night guys would be gone for lack of work.

Also, and as a final note, do not hesitate to hire a professional and certified home inspector to look things over.  Home inspectors do much more than inspect houses that are being sold.  We regularly look over quotes and examine houses and advise our clients about who would be best to fix the problem and how the work should be done.  We can make recommendations as to changes in the quote. what materials would be best and how the work is defined in the contract.

Remember, you don’t have to just accept a contractor work definition and quote.  You can request changes.  AND… if these changes are put in the contract, you have a legal means of enforcing that the work be done properly.

We also know a lot of contractors and have seen a lot of their work, some good and some not, so we are in a good position to recommend professionals who we have worked with and know the quality of their work.

Call us if you ever need any help of advise.

As always, hope this helps.